I recently attended the World Qi Gong Congress held in Toronto Ontario.  I attended only one day of the four day event.  That one day was so jam-packed with information, demonstrations and lectures I can't imagine my brain absorbing three more days worth!


I was lucky enough to participate in demonstrations in two of the workshops I attended.   The first workshop was "Energetics of Push Hands" with Lama Tantrapa.     Though it was aimed at beginners (which I am not) I was very impressed by his down-to-earth style, depth of knowledge, and skill.  He had been teaching us how to be rooted so when pushed we wouldn't lose our balance.  When he asked me to participate in a demo by pushing him, I applied all my Tai Chi principles and complied.  And pushed him off balance!  He'd under estimated my abilities, so he re-took his stance and told me to push him again.  I pushed him off balance again, though less so this time.  At this point he turned to the crowded room and announced "She is very powerful".  Yes - Lama Tantrapa said I was powerful!  I was thrilled.  And totally impressed by his lack of ego.  He took his stance again and told me to push.  It was like pushing on jello.  I couldn't find his centre and just rolled off one side or the other, no matter how many times I tried.  It was obvious I was no match for him once he stepped up his game.  But he'd had to step up his game -  proof my years of studying Tai Chi haven't been wasted!

The second workshop was with Dr. Effie Chow.  This tiny lady (I don't think she's five feet tall) is at least sixty-five years old and was sporting a cane.  She asked four large people to come to the front.   I was sitting in the second row - she pointed to me and told me to come up.  I'm overweight, and being selected for my size was hard on my ego, but I went up there anyway.  Once at the front we were told to announce our weight into the microphone so everyone could hear.   Gulp.  Well, I figured everyone could see I was overweight, so what was the big deal about putting a number on it?  So I proudly stated my true weight.  (I guess the glow from the "She is very powerful" comment hadn't worn off yet. )  Someone in the audience added it all up - together the four of us weighed over 800 lbs.   Dr. Chow told us to stand in a line, congo-style and plant ourselves firmly, but not to push back if we felt pushed.  She leaned on the first guy in line, but  couldn't budge him.  Then she used her chi to push instead of her muscles.  She pushed all four of us backward!  I was the furthest away from her yet still felt a smooth, solid and relentless energy push me back.  It was amazing.

Dr. George Love's workshop on Qi Gong to prevent/heal cancer was awesome.  Dr. Love is charismatic and inspiring and emanates a passionate and fun-loving energy.  I was so impressed with him I bought his DVD and plan to learn his Meridian Qi Gong exercises.  The DVD came with a bonus disk of his Qi Gong music video which is also on Youtube.  Watch it here and see his incredible energy for yourself.

To Tell the Truth

Scientist and shaman use a different language to tell the same story.  Both are truth spoken from a different perspective.

Current popular ideas in theoretical physics are attempting to explain the energy in the universe.  String theory tells us that unimaginably tiny vibrating strings of energy (in nine different dimensions!) are the building blocks for every particle of matter.  Another theory tells us we live not in a uni-verse but a multi-verse, an unimaginably giant place that has an infinite and ever growing number of universes contained within it.  The scientists tell us the mathematics behind these two theories support each other.  Trouble is, they don't currently have a way to test and prove these theories.  Until they do, their ideas can't be considered hard science.  But that doesn't stop those scientists from continuing their research.  They toil away, hoping that in a hundred years or so we'll have a method to prove their theories right. 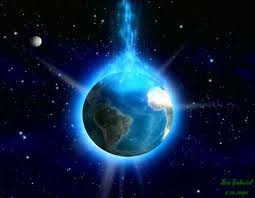 We need the same kind of determined patience in the field of the healing energy arts.  While a limited amount of science has been applied to measure healing outcomes (e.g. reduced blood pressure) we have no objective way of proving the theory behind the healing.   To tell the truth, I really don't know why Reiki and Shamballa work.  What I have received as explanation are the centuries-old stories passed from master to student.  But from experience I do know it works, and I will keep using it to heal people while I wait for the scientists to figure things out.  In the meantime, I have the language of the Shaman.

"L" is for Layers 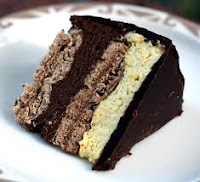 Learning Tai Chi is like building a gourmet chocolate layer cake - those tall creations we see in bakery store windows.  You know the ones, where every layer is similar in flavour, yet different enough in taste and texture to add a subtle complexity to the final product.  The bottom layer is a thick chocolate cake base - dense and sturdy to support the upper layers.  The next layer might be pudding-like, lighter than the cake below, but heavier than the ganache layer above.  The layers get lighter as you move up the cake, until the whole thing is topped off with a luscious whipped cream icing.  Yup, learning Tai Chi is just like that.  You start with the base, learning where to put your hands and feet for each move.  Then you learn the sequence of moves, memorizing them as a complete set.  Next you work on your timing, figuring out how to get the push from your feet to move your hands.  Onto this, you layer your new awareness of your own particular brand of body tension, and your strategies to relax this tension while performing the set.  This is the layer where Tai Chi becomes moving meditation.  This is the layer where emotions will release and bubble to the surface.  This is where you really need to keep things light.  Getting bogged down in emotion gets heavy, putting too much weight on the supporting layers.  So you allow those bubbles to keep rising right up into the air, taking the emotions with them.